Some days ago a road sign offered the option:  West to Chicago or East to Cleveland.  "Hard choice," said Maxim at the wheel of the little red car, "both good orchestras." After bowing in the direction of the great Cleveland Orchestra, we headed for Chicago with the anticipation of meeting CSO's legendary flutist and principal piccolo Walfrid Kujala. 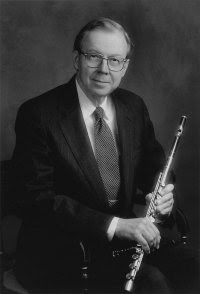 Read about Kujala’s life and publications.

Professor Kujala and his experienced Northwestern administrative team had prepared all details of our visit.  Time Out Chicago posted the concert on its web site, and the Chicago Tribune announced, "Maxim Rubtsov Flute Recital and Master Class."  Posters on campus highlighted the Thursday concert of "Maxim Rubtsov, Flute, with Yoko Yamada-Selvaggio, Piano." 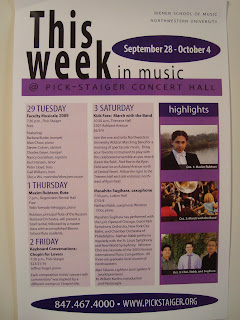 Maxim took the stage on a dark and stormy night that seemed to foreshadow trouble.  It came in the form of a sticky key on the piano, B above middle C--a note you can hardly avoid in the repertoire of a recital and master class.  With Yoko struggling to deal with the troublesome piano, Maxim added to the challenge.  He stepped forward at mid-point in his recital and announced, "Thank you for coming out tonight!  I decided to add one more beautiful Russian song to the program.  After Red Sarafan I will play The Nightingale by Alexander Aliab'ev.  They managed to finish with a near record-breaking one-minute Flight of the Bumblebee.  Before the students played, Wally Kujala offered a modest assessment.  “Most of you are too young to realize this," said Professor Kujala, "but I can observe that Maxim has the stage presence of Jean-Pierre Rampal from his eyebrows to his feet.”