The headline in The Morning Sun of Mt. Pleasant, Michigan tells the who/what/when of Maxim’s concert at Central Michigan University. Read the full story here.  But you had to be there to catch the why and how of the concert. Maxim Rubtsov and pianist Zhihua Tang lit a fire on the stage of CMU’s Staples Hall that might burn forever in the hearts of flute fans. The audience cheered, swooned and demanded more.  John Jacobson, Director of Music Events said, "The students were blown away."  Flute Professor Joanna Cowan White said it was because of Maxim’s “flawless technique.”  Professor Emerita Moonyeen Albrecht said, “The audience let out a collective sigh each time Maxim sustained a final note—seemingly without effort—letting it fade to the softest whisper.”  Was it this? Or was it the good luck of a new tuxedo, doubly strengthened by those magic suspenders? 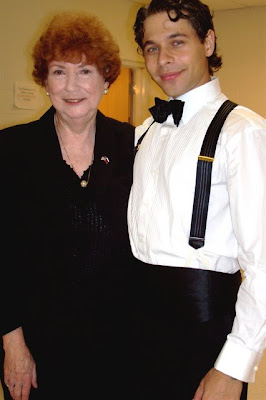 Moonie and Maxim and the Magical Suspenders