Ann Arbor, Michigan, "This is a Mahler Day."

Maxim declares it a Mahler day:  rain, clouds, a sense of gloom enshroud the parking lot where we struggle to figure out the machine that is meant to make paid parking swift and easy. A line of people with umbrellas forms behind us. We search our pockets for the right combination of coins.  Our shoes are wet.

Ann Arbor with its Big Blue buses appears to be entirely occupied by the University of Michigan.  One fine thing about the University is its music school.  Maxim has learned Hail! to the Victors Valiant from a U-Mich alum, who advises that this is an essential key to acceptance as a foreign musician in the land of football.  Despite knowing the fight song, it is tricky to find an appropriate moment to play it, given the schedule of our activities at U-Mich.  Piano accompanist Angela Wu wears red tennis shoes and looks fashionable for our first rehearsal, but maybe not in step with the Big Blue theme.

The afternoon master class with Professor Amy Porter's flute studio presses against our time for lunch, and we forget to feed the parking meter.  Our punishment is a $10 parking ticket that causes Maxim distress.  Arriving late for the class, we meet Amy and she offers Maxim a banana, the backstage comfort food and energy-jump for musicians whose performance demands are a lot like long-distance runners.

Maxim does not unpack his flute for the class, choosing to coach the students with words, stories and grandiose gestures, as he usually prefers.  On this day Prokofiev's "big whore" makes an unexpected appearance on the linguistic stage, or so it seems to those of us who understand both Russian and English.  Maxim neglected to translate the Russian word for choir, which sounds phonetically like the English word whore.  With arms open wide he demonstrates the size of Prokofiev's masterpiece for orchestra and choir.  For me the historical point of the story was momentarily lost, but hopefully the students connected with Maxim's explanation of Russian history, Stalin's censureship of Prokofiev, and most important Prokofiev's genius as a composer who meant to convey his life's experiences in music.

To conclude the master class a flute quartet comprised of Katherine Standefer, Anne Dearth, Kelly Zimba and Erin O’Shea present a crisp rendition of Andrey Rubtsov’s Flowers of the Sun. This is the first time we have heard the composition played as it was written--and we like it!  It reminds us that the sun does shine and flowers bloom on other days in Ann Arbor.  At Central Michigan University they experimented with Flowers played by a flute choir, and that too was a unique sound.  Learn more about Andrey Rubtsov-- oboist, composer and conductor--here at his web site. 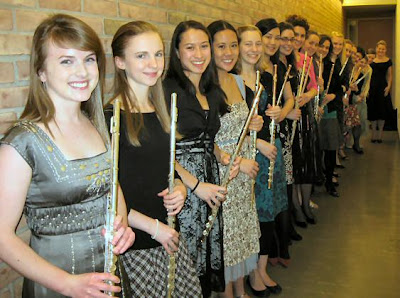 The 2009 University of Michigan Flute Studio

Maxim's words to every flutist, “The flute is the voice of our soul, our language which describes our life.”