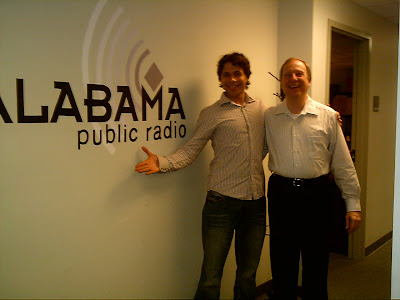 David Duff of Alabama Public Radio wrote to me on January 8th to say:


Just a quick note to let you know that on Monday, January 11th, Performance Today will broadcast a selection from Maxim Rubtsov's concert at the University of Alabama.


If you missed it, here is the web link to PT’s archive.  Under Today’s Playlist, Hour 1, click on Listen.

Martha Bredon wrote me to say:


Just listened to Max’s encore on NPR...his control on that last long note is incredible!

Let's hear it for the Crimson Tide.  They don't just do football, they do music with the same passion.  Their School of Music hosts an annual residency for RNO soloists and ensembles, which has featured RNO principal flute Maxim Rubtsov in 2009 and RNO principal trumpet Vladislav Lavrik in 2008.

American Public Media's Performance Today is broadcast on 245 public radio stations across the country and is heard by about 1.2 million people each week.
Posted by Mary Ann Allin at 11:45 PM